Late Fees: Why it is important

What is a late fee?

A late fee (or late fine) is a charge against a tenant for  not paying an invoice by its due date or after a grace period. The majority of landlords consider late fees to be very useful as it motivates tenants to pay rent on time, which helps in avoiding late fees for delinquent mortgage payments. Many tenants don’t know that landlords owe the bank a monthly payment, so if they are late then so is the landlord.

Automated late fees can assist in keeping your lease operating the way it was designed. Running around town trying to collect rent and then ignoring late fees because you are just happy to get rent shouldn’t be happening anymore.

Yes, late fees are legal. But only if they are detailed in your lease (!) and follow the local laws as they vary in each state. For example, in the state of Maine, landlords are not allowed to charge a fee greater than 4% of the monthly rent.

You can turn on the late fees and set it up on the second step of moving in process: 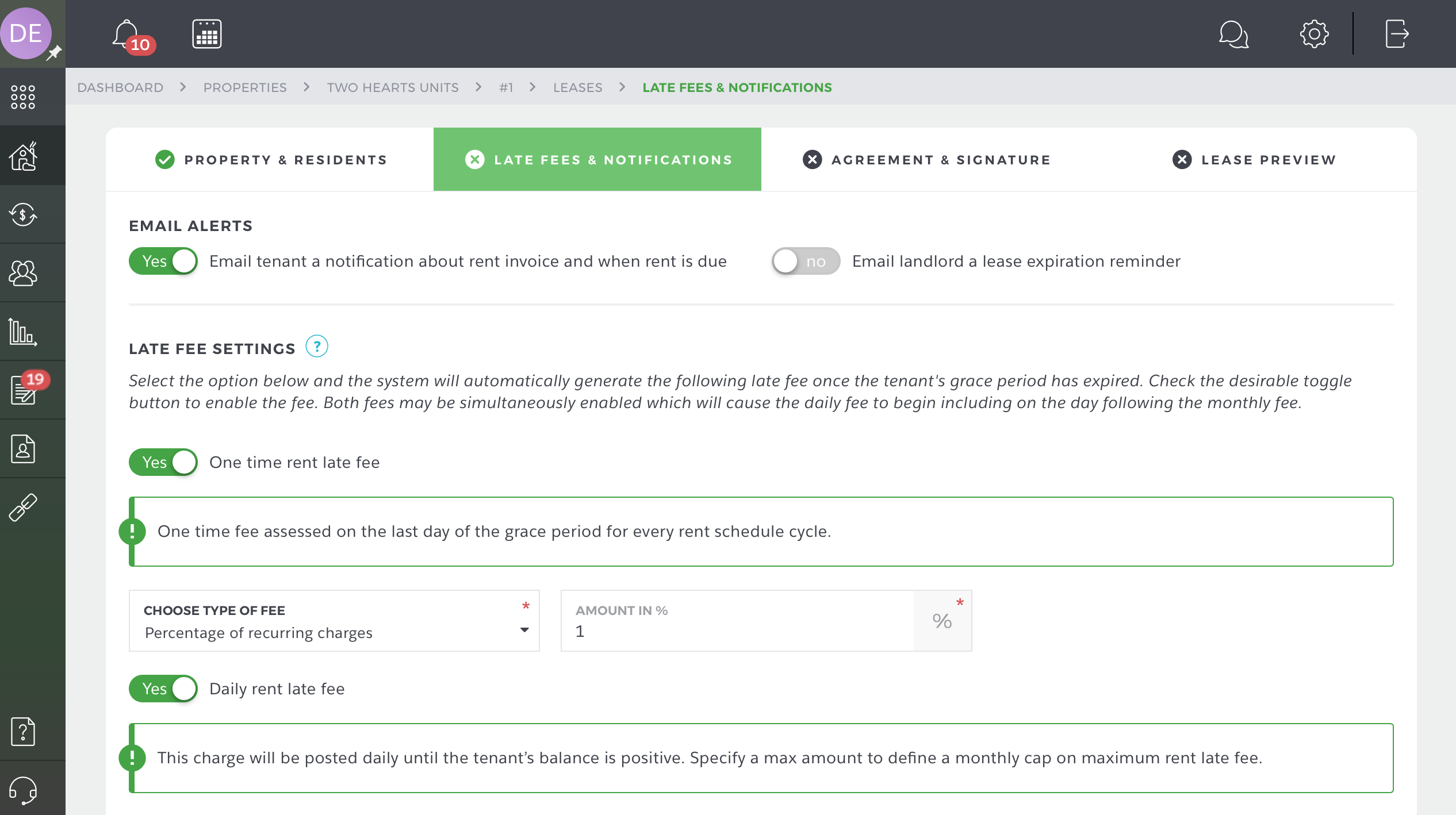 Why it is important to charge a late fee

As we’ve already said, late fees penalize a tenant for paying late in hopes of them paying on time. You may ask, whether it makes such a big difference, and the answer is Yes, it does.

Setting precedence is very important. If you avoid a late fee the first time then next month it will be a couple more days late. Soon you won’t get your rent check until the end of the month. Having late fees be automatic in TenantCloud helps because you don’t have to tell the tenant their rent will be late and they won’t have any surprises, but their account will automatically show the late fee the day it is late and you don’t have to do anything.

What is a grace period?

When talking about late fees, taking into account a grace period is also very important. A grace period is a period of time after a payment becomes due that is given to tenants before charging the late fee.

First of all you need to decide when to consider a rent payment late and whether you want to give a grace period to the tenants.

If you decided to give a grace period, then choose a number of days in the Accounting settings of your TenantCloud profile. For example, if the rent is due on the first of the month, and the grace period is three days, then the late fee will be charged starting from the fourth of the month.

If you choose one-time rent late fee, it will be assessed on the last day of the grace period. It can be a fixed amount, percentage of recurring charges and percentage of outstanding charges. It’s common for landlords to choose near 3-5% of their monthly rent price or between $25 and $50 if it is a fixed amount.

The disadvantage of one-time rent late fees is that once a tenant has paid the late fee, there’s no more motivation to pay quickly, and this may cause further delinquency.

On the contrary, daily rent late fees force tenants to pay as quickly as possible. In TenantCloud, there are two types of this fees - fixed amount and percentage of outstanding charges.

Don’t forget, late fees are to help collect rent and not for generating revenue, so please, be reasonable :)

If you need a step-by-step instruction, go to:

How do I set up late fees?